We are off to see the Wizard….

The Wonderful Wizard of OZ

Who among us isn’t a fan of the Wizard of Oz?

You have probably seen the movie starring Judy Garland hundreds of times, and each time you love it as much as the first. You probably grew up watching it with a sense of wonderment and continued your love well into adulthood. The movie has been loved by millions of people worldwide, entertaining the young and young at heart for generations. It is a classic bit of cinema, for sure.

The book that the film (and many other iterations) is based on is from the imagination of famed author L. Frank Baum. Baum wrote 14 novels in the Oz series, 41 other novels, 83 short stories, 200 poems, and 42 scripts.

The book (and films) tells the story of a young farm girl transported from her drab farm life via tornado to the enchanting Land of Oz, a land full of fantastical characters, enchanted forests, and adventure. She must follow the yellow brick road to find the Wonderful Wizard of OZ, who is the only person who can get her back home to Aunt Em and Uncle Henry back in Kansas.

As fans of the Wizard of Oz ourselves, when we learn of Oz-themed travel adventures and destinations, you know we are making plans to check that out when we are in the area. We have a few Journey to the Land of Oz adventures we want to share so you can go looking for your heart’s desire as well.

The Village of Chittenango is a small town in upstate New York, about a 30-minute drive east of Syracuse, just south of Oneida Lake. This village is the town where L. Frank Baum was born on May 15, 1856. The first time we visited Chittenango was in November 2017, when we stopped in on our way home from a visit to Vermont. This visit was when we first learned of the Village of Chittenango and its connection to the Wizard of OZ. The town was quiet and dark, but the yellow brick sidewalks were vibrantly peering through a light dusting of snow. We knew we had to plan a future trip to see it in all of its OZ-ian glory. 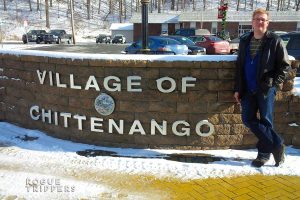 To celebrate their hometown hero, the folks of Chittenango hold an event that is not to be missed  –      Oz-Stravaganza. The event has taken place for over 40 years, honouring and celebrating all things OZ. Whether you are a fan of the books, the many movies, the musical, various cartoons, or any other incarnation of Oz that has occurred over the years  –  Oz-stravaganza welcomes you.

One weekend of the year, the streets of the village come alive with visitors from all over. They come to share their love of The Wizard of OZ. A program outlines the events taking place the entire weekend, including concerts, performances, amusements, food vendors, meet & greet, contests, and much more to keep you busy. Many people come dressed as their favourite Oz-ian character for the costume/cosplay contest, drawing a rather large crowd.

Ease On Down the Road

There is a parade that runs through the main streets of the village of Chittenango, where local businesses and volunteers create floats with an OZ theme. The parade’s grand marshal is always a celebrity or person connected to OZ in some fashion – an actor, musician, author, relative, etc.

The parade comes to an end at the park at Genesee & Arch St. Here, you will find the main stage for activities, dozens of vendors selling oz-related memorabilia and merchandise, food and beverage vendors, and more. At the entrance to the park, you might even find a photo op for your social media posts.

You Wanted to See the Wizard

The year we decided to return to Oz for the festival, we lucked out with their celebrity guests. The Grand 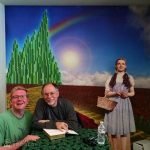 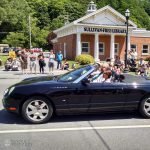 Marshal of the parade this year was Ken Page, who I recognized from his fantastic role as “Marsha Dimes” in Torch Song Trilogy, Oogie Boogie in Nightmare Before Christmas, his role in Dream Girls, and many other film & television appearances. His connection to the world of OZ was that he played the cowardly lion in a stage production of The Wiz. Gregory Maguire, the author of the book “Wicked” (the hit musical of the same name is based on his book), was also doing a book signing. Nick had just read the book, and we both loved the musical, so this was a definite highlight. I didn’t get to meet Ken Paige, but Nick got a photo with Gregory Maguire and his book signed, which he will cherish.

We welcome you to Munchkin Land

In town, you will find the All Things OZ Museum, where they have a pretty impressive collection of OZ-tastic artefacts and memorabilia, including books, photos, movie props, stage costumes, autographs, and so much more. You can buy some souvenirs here and at other shops in town throughout the year – not only during Oz-stravaganza. The town takes their love of The Wizard of Oz very seriously. They even have the Yellow Brick Casino, which is a perfect place to finish off your Wizard of Oz adventure. It has all of the details covered – the name, the mural of the characters, the sculpture of a tornado at the entrance, the carpet, the Winged monkeys, and more.

Check out our article on Unusual Museums – featuring All About OZ

Due to Covid-19, the organizers cancelled the festival for the past two years. They hope to resume normal operations in 2023. Stay tuned for more.

While the amusement park is no longer in existence, new life has been brought to the Emerald City. Since the park’s closure, former employees of the original park would gather annually at the abandoned park for reunions. This led to the beginning of a restoration project of the grounds of the park and many of the attractions. These annual meetings turned into events that became open to the public. Once a year, you can purchase tickets to attend the Autumn at Oz event, held over 3 weekends in September. Here, you can Follow the Yellow Brick Road through the Land Of OZ and visit all the characters you have come to love (and some you hate).

The wind began to switch

Your journey through the land of oz takes you to all of the scenes from the movie. Throughout the walk, you will see Professor Marvel at his Wagon. You will see Elvira Gulch on her bicycle. You will visit Aunt Em and Uncle Henry’s farmhouse, where you will be whisked away by a tornado to Munchkinland. As you ease on down the road, you will come upon Glinda, the good witch of the north, The Scarecrow, The Tinman, the Lion, and the other characters. When you come upon the gates of OZ, the guards will stop you because “nobody sees the wizard – not no way, not no how”. So how will you get through?

If I only had the Nerve

Beware! The Wicked Witch of the West has released her evil flying monkeys from her castle, and they can pop up at any time. Do you have the brains, the heart, and the courage to make it through? Will the monkeys capture you? Will you succumb to the poisoned poppies?

While you are on the mountain, be sure to explore the Oz Museum, the craft and merchandise vendors where you can purchase OZ themed gifts, and the Land of Oz Giftshop. This store is a treasure trove of trinkets with an OZ twist.

We are not in Kansas anymore – we are in Chicago

While on a road trip to Chicago, we came across “OZ Park” in the city’s Lincoln Park area. We came upon it 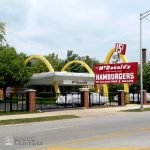 entirely by chance having no idea it was even there. We were heading out to Des Plaines, a small suburb of Chicago. Our mission was to visit the #1 McDonalds store and museum location. It is considered the first McDonalds, the one that cemented Ray Kroc’s involvement. While on route, we drove right past the park, and Nick said, “is that a statue of the Tinman?”. As it turns out, yes, it was. So, he turned around and made one of those ‘unexpected’ stops that we have become known for. (and why we make travel plans very flexible)

Located in the Lincoln Park area in the north end of Chicago, OzPark can be found at the intersection where N. Lincoln Ave, N Larrabee St, and W webster converge. Oz Park is home to typical things you would find in a park. There is a playground, walking trails, gardens, baseball diamonds, and a tennis court. However, the draw for us was the statues of the Wizard of Oz characters – Dorothy & Toto, The Tin Woodman, The Cowardly Lion, and The Scarecrow, which are found throughout the park.

In 1976, OZ park was opened in honour of L. Frank Baum, who lived in Chicago – not far from where the park is today. This is a fact which we did not know about Baum until we saw the sculptures. The first sculpture, the Tin Man, was installed in 1995, with Cowardly Lion arriving in 2001. The Scarecrow came to the park in 2005, and in 2007, Dorothy & Toto joined their friends in the park.

The Hotel del Coronado is a historic property, located on the ocean side of Coronado Island. Its luxury accommodations, gorgeous exterior, beachfront location, and incredible hospitality have been attracting visitors for decades. The hotel is a favourite for the rich and famous, and has even been prominently featured in movies like “Some Like it Hot”.

L. Frank Baum loved the Coronado (who doesn’t) and stayed here frequently. In fact, he wrote some of the Wizard of OZ books at the hotel.  There are no sculptures or statues of Wizard of Oz characters, or a yellow brick road, but it is a fabulous place to visit (or stay) when you are in San Diego.

In the small town of Wamego, Kansas there is an OZ Museum, and once a year (in October) they hold the Oztoberfest. We have not been – but will be keeping it in mind for future travel plans.

So, if you ever go off in search of your heart’s desire ….
Or if you are looking for a Wizard of Oz adventure….
all you have to do is click your heels together 3 times…. and say “There is No Place Like OZ”

* Cover photo and photos marked (*) @Sean Barrett and provided to us by @Land Of Oz, NC

Adventurer, gastro-tourist, avid road tripper, and butter tart aficionado. Exploring the road less travelled and the adventures that exist for all to see if you open yourself up to new possibilities. Greg and his husband Nick are residents of Guelph, and their greatest joys in life are exploring the world around them. Road trips with no real destination are a favourite past time. Get off the beaten path and discover somewhere they have never been before. Sometimes the best vacations are the ones you don't really plan. Life is about the journey together and not the destination.

Unusual museums that you will want to visit.

Weird museums that you will want to visit