Take a Journey to Ancient Egypt

at the Nova Scotia Museum of Natural History

For many people (including me), a trip to Egypt ranks pretty high up on a travel wish list.
And for good reasons! Who isn’t mesmerised by the iconic towering pyramids, wonderfully preserved mummies, and delightfully pictorial hieroglyphics that show us tantalising glimpses of the lives of ancient Egyptians?

Welcome to the Egyptian Mummies and Eternal Life Exhibit

Nova Scotians can now visit ancient Egypt without leaving the province, by visiting Egyptian Mummies and Eternal Life at Halifax’s Museum of Natural History. On display until fall 2020. 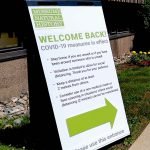 The exhibit, part of a collaboration with Museo Egizio in Florence, Italy, boasts hundreds of ancient Egyptian artifacts, including jewellery, furniture, sarcophagi, and even mummies themselves. There’s never been a better time to get out and enjoy your own province, and the museum’s extensive COVID-19 practices will keep you and your family safe while you’re visiting. Curator of visitor experiences and exhibits, Jeff Gray, showed me around this unique exhibit that promises fascinating fun for all ages.

When you think of ancient Egypt, mummies are probably the first thing that comes to mind. But have you ever wondered exactly how the process of mummification worked? The first of three exhibit rooms share this secret – and many others – with visitors.

You’ll see actual rolls of perfectly preserved bandages that were used in the mummification process. In addition to dressings, you will see embalming instruments and the canopic jars used to protect the organs after they were removed during mummification.

But of course, the real stars of this room are the mummies themselves. They are lovingly embalmed, wrapped, and forever preserved in preparation for the journey to the afterlife. The mummy of a young woman and, poignantly, an infant with its simple wooden coffin, reveal elaborately decorative wrapping techniques used by ancient Egyptians. The wonderfully preserved mummified head of a young man contains visible strands of hair, even after more than 2000 years, and it’s easy to imagine him as he would have been in life, not so different from any of us. There are even fragile fragments of funerary papyrus scrolls of the Book of the Dead, placed in tombs to help guide the soul through the afterlife.

You’re probably familiar with the gold mask of Tutankhamun, one of the most famous works of art in the world. Death masks like this, and less-ornate ones for the average person who couldn’t afford gilded versions, were placed on mummies so that the soul could recognize its body and return to it. The second exhibit room features some of these beautifully painted masks from different periods in ancient Egypt.
Perhaps the most stunning items in the whole exhibit are the intricately carved and decorated sarcophagi; still vibrant and evocative after thousands of years. One notable example reveals not only the exterior but also the interior. It is covered with hieroglyphics, images of gods and goddesses, and scenes of the afterlife the deceased hoped to enjoy. The incredible artistry of the ancient Egyptians is evident. As well as their passion for ensuring that life continued beyond death.

To continue living comfortably in the afterlife, it was thought that the deceased needed to be provided with all of the things he or she used in daily life. Even the simplest of graves contained food and drink, as well as personal belongings. The third exhibit room displays a fascinating array of these objects, including jewellery, combs, mirrors, cosmetic bowls, furniture. There is also miraculously preserved bread, and a headrest (used the way pillows are today).

You’ll be captivated by the 3000-year old sandals, made of woven plant fibres, and a beautifully preserved linen shirt; it almost seems like their owners just stepped away momentarily, and could return any second to use them again. That’s the beauty of these grave goods. They show us how ancient Egyptians lived, and what was important to them. We begin to see that even though they lived millennia ago, they were living, breathing human beings, just like us.

A Love Affair with Life

Ancient Egyptians weren’t obsessed with death, as is commonly believed – they were obsessed with life! The elaborate funeral practices of ancient Egypt were designed to ensure that life would continue after death. By preserving their bodies and belongings loved ones could enjoy the rewards of the afterlife. Which was a mirror image of the life they’d just left.

The Museum of Natural History’s Egyptian Mummies and Eternal Life exhibit is the perfect way to immerse yourself in the fascinating culture of ancient Egypt, all without leaving the city. Make sure you drop by before the exhibit leaves this fall!

If you are in Nova Scotia, why not check out other great things to do in Halifax, including the Pier 21 Museum of Immigration.

*This article was done through the cooperation (and suggestion) of the Museum of Natural History in Halifax, one of the many amazing Nova Scotia Museums.

Stacy has lived in 4 countries on 3 continents and travels whenever humanly possible. Passionate about music theatre, dessert, and adventure in the great wide somewhere, she visits Walt Disney World every year, usually during Halloween! Stacy currently divides her time between writing and teaching English as a second language to children in China, and is pretty sure growing up is over-rated. Stacy is a resident of the great province of Nova Scotia and has been loving every minute of her life exploring Canada's Ocean Playground. There is no shortage of things for her to discover in Nova Scotia, and every chance she gets, she is off on a brand new adventure, including farms, museums, hiking trails, hidden gems, land and seascapes, and much more.